Is it a good time for a Roth conversion? 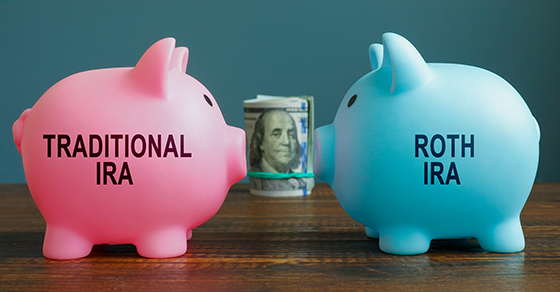 Is it a good time for a Roth conversion?

The downturn in the stock market may have caused the value of your retirement account to decrease. But if you have a traditional IRA, this decline may provide a valuable opportunity: It may allow you to convert your traditional IRA to a Roth IRA at a lower tax cost. Traditional vs. Roth Here’s what makes a traditional IRA different from a Roth IRA: Traditional IRA. Contributions to a traditiona l IRA may be deductible, depending on your modified adjusted gross income (MAGI) and whether you (or your spouse) participate in a qualified retirement plan, such as a 401(k).

Funds in the account can grow tax deferred. On the downside, you generally must pay income tax on withdrawals. In addition, you’ll face a penalty if you withdraw funds before age 59½ - unless you qualify for a handful of exceptions - and you’ll face an even larger penalty if you don’t take your required minimum distributions (RMDs) after age 72. Roth IRA.

Roth IRA contributions are never deductible. But withdrawals - including earnings - are tax free as long as you’re age 59½ or older and the account has been open at least five years. In addition, you’re allowed to withdraw contributions at any time tax - and penalty-free. You also don’t have to begin taking RMDs after you reach age 72. However, the ability to contribute to a Roth IRA is subject to limits based on your MAGI. Fortunately, no matter how high your income, you’re eligible to convert a traditional IRA to a Roth. The catch? You’ll have to pay income tax on the amount converted.

Your tax hit may be reduced This is where the “benefit” of a stock market downturn comes in. If your traditional IRA has lost value, converting to a Roth now rather than later will minimize your tax hit. Plus, you’ll avoid tax on future appreciation when the market goes back up. It’s important to think through the details before you convert. Here are some of the issues to consider when deciding whether to make a conversion: Having enough money to pay the tax bill.

If you don’t have the cash on hand to cover the taxes owed on the conversion, you may have to dip into your retirement funds. This will erode your nest egg. The more money you convert and the higher your tax bracket, the bigger the tax hit. Your retirement plans. Your stage of life may also affect your decision. Typically, you wouldn’t convert a traditional IRA to a Roth IRA if you expect to retire soon and start drawing down on the account right away. Usually, the goal is to allow the funds to grow and compound over time without any tax erosion.

Keep in mind that converting a traditional IRA to a Roth isn’t an all-or-nothing deal. You can convert as much or as little of the money from your traditional IRA account as you like. So, you might decide to gradually convert your account to spread out the tax hit over several years. There are also other issues that need to be considered before executing a Roth IRA conversion.